Favre is at it again,   I thought I would reintroduce the Favre Watch, just so people know what threat level we are on.  It is based off of our government's national threat level chart, but modified with a Favre touch.

We are currently at "High". 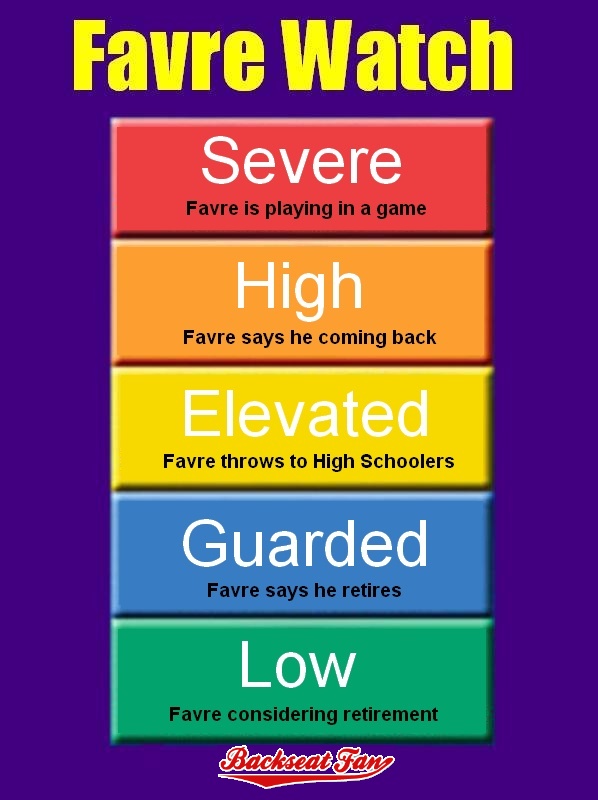 Favre actually has taken a snap in an NFL game.  Whether it is preseason or regular season he is playing football.  You can't trust that Favre is coming back until he is in a real game.

Rumors start circulating that Favre is coming back. He texts teammates, all of a sudden he starts talking to Ed Werder of ESPN.  He feels great,  like he can compete again. Also training camp is almost over.  That might be just coincidence though.

Favre thought he would test out the old Arm/Ankle/ whatever is ailing him again by throwing to some local high school kids in Mississippi. He feels good but he doesn't know if he is quite there yet.  Also known as he starts to get the itch.

Favre thought long and hard, but he just can't do it anymore.  He has hd too much 'wear and tear' on his body.  He would love to still play, his heart is there, but his body just can't keep up.  Favre announces he will retire.

Favre is considering retirement, he isn't sure if he want's to hang up his cleats and call it quits, or if he wants to play for the chance to win one more super bowl