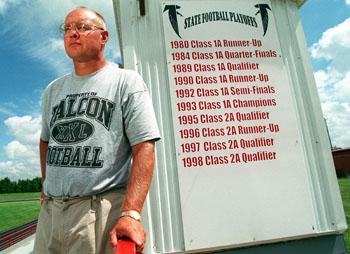 This story really hit home for me, I played against Coach Ed Thomas in High School, and he didn't deserve to go out like this. He was an NFL High School Coach of the Year and is at the top of high school coaches in Iowa History. He produced multiple NFL players from a small community in Iowa.

Although a murder charge won't bring Ed Thomas back, it does give a little justice to a sad story.

Mark Becker has been found guilty in the June 24 shooting death of Coach Ed Thomas.

A first-degree murder conviction is punishable by a mandatory sentence of life in prison without parole, official sentencing will be at a later date.

The defense had argued Becker, who suffers from paranoid schizophrenia, was insane at the time of the crime and wasn't able to know the nature of his actions or distinguish right from wrong.

The prosecution argued that Becker's mental illness didn't equate with insanity at the time of the shooting. The state said he methodically planned the killing and made the choice to take Thomas' life.

Jurors heard from students who watched the shooting unfold right in front of them. They also heard from authorities who took Becker into custody and questioned him right after the shooting.

Becker told an Iowa Division of Criminal Investigation agent that he opened fire on Thomas because he believed the coach was a "devil tyrant" who oppressed children, turned people into animals and fish and was harassing him through ESP.

Jurors also heard from family members about Becker's earlier psychotic episodes and three mental health hospitalizations, the most recent of which ended the day before the slaying.