Todd Lickliter has been fired as Iowa men’s basketball coach. Iowa was 38-58 under Lickliter, including 10-22 this season. Iowa’s school-record was 22 losses in a season. Needless to say, he deserved to get fired. Who will replace him to be Iowa's next coach? 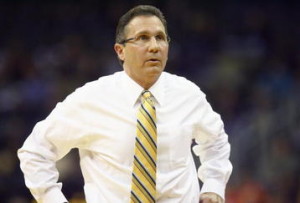 I just hope it's not Ben Jacobson from UNI. UNI is a better basketball school than Iowa, and always will be. Iowa is a football driven school, and basketball is just something to do once football season is over.

A few names that have been floating around are Bruce Pearl of Tennessee and Keno Davis of Providence. Pearl is a former Iowa assistant to Tom Davis so he has a little black and gold in him under that bright orange jacket. Keno is Tom Davis' son, and will probably be recruited hard by Iowa. He coached Drake into the NCAA tourny, but he isn't doing so hot at Providence. Iowa might be a good place to come back to before he gets on the hot seat.

I heard that New Mexico coach was pretty good, but the Hawkeyes aren't interested?