According to ESPN, the New York Jets are going to let Thomas Jones become a free agent. Jones rushed for 1,402 yards and 14 touchdowns on 331 carries last season. But he is 31, and who knows if he can keep it up next season, plus Shonn Greene is a beast. Shonn Greene did great during the playoffs, a lot better than Thomas Jones, so I can see why the Jets see Jones as disposable. Also the Jets will be getting a healthy Leon Washington back this season, who will spell Shonn Greene, no need to keep 3 great running backs on one roster. 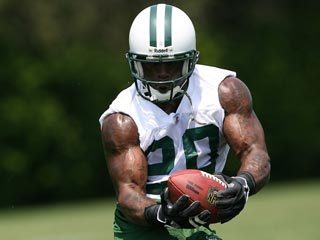 Jones should be picked up by someone fairly quickly, he showed that he could be a bruising RB. But he probably can't be a feature back all season long. So where will he end up? Look for somewhere in the division. Patriots seem like a good choice to me, the love old RBs

Some big names at RB have been cut this year, Tomlinson, Westbrook, and Jones?. Who's next?