Oklahoma State WR Dez Bryant has been ruled ineligibile for an improper interaction with a former NFL player.

Bryant, is an All-American who is listed ninth overall on Mel Kiper Jr.'s Big Board, was ruled ineligible by the school because he failed to fully disclose his interaction with a former NFL player to the NCAA.

Bryant will apply forreinstatementby the NCAA but it is a long process. Bryant did not play last weekend against Grambling State.

The school released the following statement by Dez Bryant, "I made a mistake by not being entirely truthful when meeting with the NCAA. I sincerely regret my mistake and apologize to my teammates, coaches, OSU fans and the NCAA."

The bylaw Bryant apparently violated was 10.1, which states,"Knowingly furnishing the NCAA or the individual's institution false or misleading information concerning the individual's involvement in or knowledge of matters relevant to a possible violation of an NCAA regulation."

This is a crushing blow to OSU's already slim title hopes, Oklahoma State could easily lose 3 more games this season against Missouri, Texas, and Oklahoma. 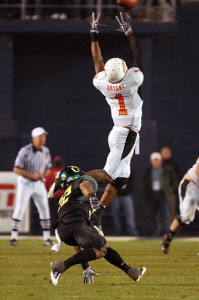