Oklahoma tight end Jermaine Gresham will miss the rest of the season after having surgery to repair torn cartilage in his right knee.

Doctors performed arthroscopic surgery on Gresham's knee today and discovered that they needed to stitch together some cartilage in his knee as well, he should need five months to recover.

This is terrible news for the #13 Sooner who lost starting quarterback Sam Bradford in Saturday's 14-13 loss to BYU for at least two weeks.

Gresham and Bradford were both considered top NFL prospects before they decided to return to Oklahoma to pursue a national championship. Injuries like this will make the next players in their situation think twice about coming back to college to play when they could make their riches in the NFL. 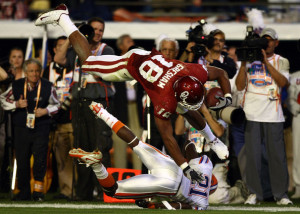