The Jets' first five games may be the hardest first five in the NFL. @ Houston, vs New England, vs Tennessee, @ New Orleans, @ Miami. The Jets are most likely going to start 1-4, if not 0-5 no matter who their quarterback is those first 5 games. Start Kellen Clemens the first 5 games and let him be the 'bad guy', then bring Sanchez in to the save the day. Expectations will be lower since the season is already lost plus Sanchez won't have to go through a horrendous start, that could damage his career (see Smith, Alex and Carr, David). The fans' interpretation of success for Mark Sanchez this season is based off their own expectations, not his actual results. So, if the Jets start off 0-5 and Mark Sanchez can lead them to a 4-7 record the rest of the way Jets fans will be happier than if Mark Sanchez led them to a 4-12 season, even though it's the same end result. 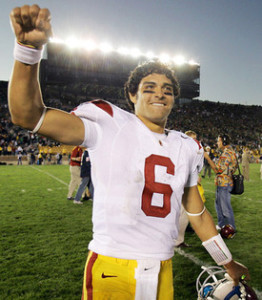