WCCO-TV is reporting that QB Brett Favre is expected to sign with the Vikings today.

The Vikings source is apparently a 'high-level executive' with the Minnesota Vikings.

"Favre is on currently on his way to Minneapolis and is expected to sign with the team this afternoon, the source said.

WCCO-TV spoke with an official at the Hattiesburg, Miss., airport, who saw an airplane with the Vikings logo leave the airport Tuesday morning. The flight number for that plane has been blocked from tracking systems."

A source close to Brett Favre said the quarterback, pending a physical, will sign a contract with the Minnesota Vikings for between $10 million to $12 million, according to ESPN senior NFL analyst Chris Mortensen.

The Favre watch has been elevated to High 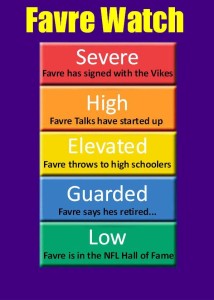