The Raiders signed a one year deal with Jeff Garcia today, he will be the backup toJaMarcus Russell. But aren't there a few teams out there that should have taken a good look at Jeff Garcia as their starter? Some teams come to mind that could have grabbed him such as Broncos, Jets, 49ers, maybe the Rams, or even the Lions. But the number one team on my mind is the Minnesota Vikings. Garcia would be an improvement over Tarvaris Jacksonand Sage Rosenfels (And the Vikings wouldn't have spent a 4th rounder on Sage) and he fits in perfectly with their West Coast System. He would also be able to mentor John David Booty to take his place next year or the year after. Signing Jeff Garcia wouldn't throw their season away, it would put them in a better position to win. Garcia helped the Eagles make the playoffs three years ago, helped the Bucs make the playoffs two years ago, and last year almost made the playoffs if the Bucs season didn't colapse. Just face it he has the ability to lead a team and win with that team. Overall this is a smart decision for the Raiders, they have a low risk one year contract for a guy that could probably beat outJaMarcus Russell. And as a bonus he is a better backup then Andrew Walters andMarques Tuiasosopo. 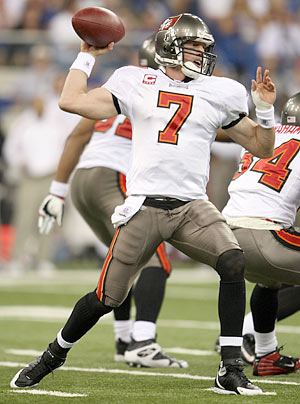