The Oklahoma City Thunder and Los Angeles Clippers will face in the Western Conference Semifinals starting this Monday night. The Thunder are coming in off two strong performances after they struggled mightily in the first five games of their series against Memphis. The Los Angeles Clippers are coming off a tough seven game series against the Golden State Warriors and also a very emotional week.

These two teams are great matchups for each other with two of the best PG's in the league and three of the best forwards in the league squaring off in this series. Looking at online sportsbooks the Thunder are the favorite, but nothing would surprise me in this series. Chris Paul is injured, but if he can fight through his injuries he has the ability to lead the Clippers in the Western Conference Finals. Blake Griffin was a double-double machine in the regular season, but hasn't hit his stride yet in these playoffs. DeAndre Jordan has been the player we've all been waiting for him to become scoring 12 points a night, pulling down 15 points and blocking 4 shots on average.

Kevin Durant is the best shooter left in the playoffs (and probably in the world with all due respect to Steph Curry) and can put up 40 any given night. Russell Westbrook hasn't shot the best in these playoffs, but he's been rebounding and passing very well (and also carelessly). Finally Serge Ibaka is another guy who could have a huge impact on this series. He wasn't involved much on offense in their first round matchup, but that needs to change in this series for the Thunder to keep advancing. 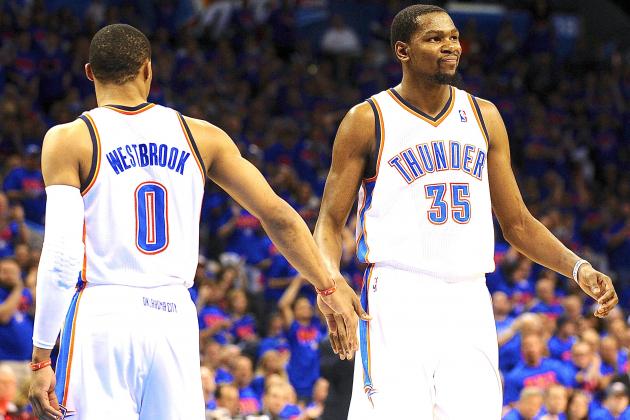