Remember all those endorsements you got because you were 'America's hero'? There were plenty of us who didn't buy into that and now you've proven that you're an insensitive jerk. Brees recently compared the evidence of Weapons of Mass Destruction to the bounties the Saints imposed on players.

Now, I understand you want to support your fellow teammates (are they teammates since he's not signed?), but comparing bounties to something that started a war where thousands of lives have been taken is just insensitive.

Now if Drew did any research before his statement he'd know that in 2009  OPCW Director General Rogelio Pfirter announced that there were Weapons of Mass Destruction in Iraq in 2003. Maybe Drew was just saying it would take 6 years before they finally admitted to imposing the bounties on players?

I'm sure once Drew realizes the stupidity of his statement he'll say his twitter account was hacked or his dog typed it up, but there's no getting out of this one, Drew. 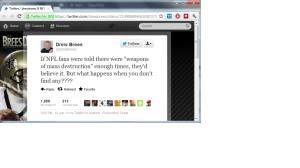 via Drew Brees himself PFT