If the season ended today the National League batting title champion would be Joey Votto with a .323 average. He would be followed by Martin Prado and Placido Polanco at .318, Albert Pujols at .316 and Carlos Gonzalez at .315. To qualify for the batting title a player needs 3.1 plate appearances (PAs) per team game or 502 PAs over the course of the season. Barring a significant injury to any of those 5 players they will all qualify for the title in the next couple weeks (if they haven't already).

So, the question remains: Who will win the National League batting title? Surprisingly, I think it's Omar Infante. Who? The guy who was undeservedly put on the NL All-Star team? Yep, that guy. Infante is currently batting .349 and is on pace to hit just 460 PAs which would leave him short of the 502 required to qualify. He can however take an Oh-fer on those 42 PAs and that would drop his batting average down to .318 which would still leave him in a tie for 2nd place in a weak NL race this year. Now many of you know Infante has not been a starter all season, he only became a full time starter when Martin Prado went down with 3 days left in August. Since then Infante has played in every game (24). The odds of Infante playing all of Atlanta's 38 remaining games are pretty slim, but what if he plays in 34 of those 38 games? Infante would end up 18 plate appearances short of qualifying, but even adding on an 0-18 on his resume he would still finish at .336, easily good enough for the crown.

UPDATE: One question I have gotten so far is where did the 1.51 hits per game come in? I used his current .349 batting average to figure that out, not his .394 average since he came a starter. 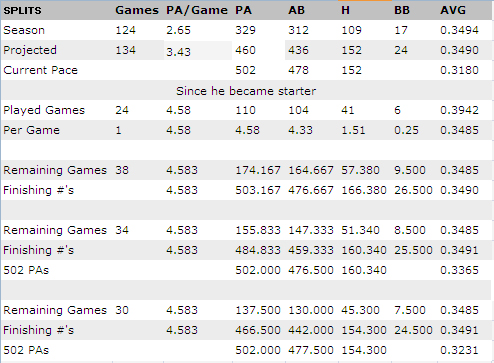 So, what do you guys think? Can Infante keep up his hot streak (season?) and capture the batting title while no one is looking?