NFL players are large, larger than they have ever been.  40 years ago there was 1 player in the NFL that was over 300 pounds.  Now there are 394 players over 300 pounds. Either the NFL has gotten bigger and stronger, or Americans have really gotten fat. 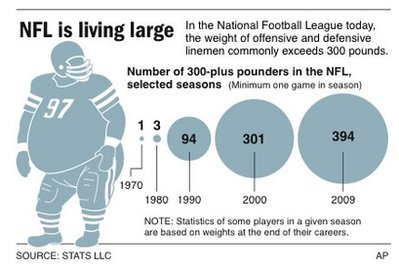 How Scottie Pippen became the Scottie Pippen we know today, a hall of famer.   Scottie Pippen helped make Michael Jordan the champion that he is today.  Just like how LeBron will be Wades' Pippen? [ via Chicago Tribune]

Donte' Stallworth took a plea deal to avoid trial, he probably would have won his trial.  He was trying to do the right thing for the family of the man that he accidental killed.  On a side note, I think Stallworth is going to go crazy this season with the Ravens, he seems like a pretty hungry number 3 WR?. [via Yahoo Sports]

I guess there was preseason football last night?  So close to the regular season, yet so far away? [via ESPN]

Comparing the Jersey Shore cast to College football players and coaches?  [via The Big Lead]

Ben Roethlisberger changed his hometown from Findlay, Ohio to Corey Rawson, a town that doesn't exist? How is this even possible?  [via PFT]

12 year old Kid who is a racing sensation is pimping the Gun Broker website: