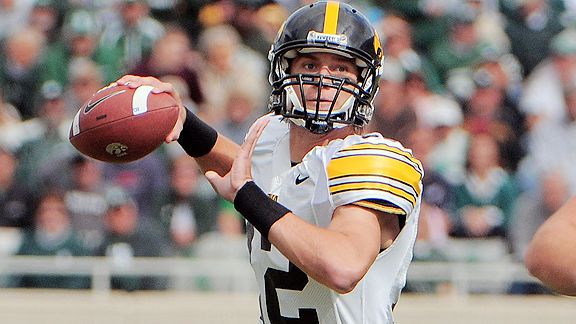 Ricky Stanzi had surgery on his injured right ankle. He should be back for the bowl game, probably not the next two weeks.

"It is correct that he had surgery," Ferentz said Tuesday. "We think he's going to be just fine. It's very, very doubtful that he'll play in the next two weeks, but we're very, very confident that he'll return shortly thereafter and be ready to go."

Ferentz said he was optimistic that Stanzi will return for a bowl game, so chances are he will.

Stanzi severely sprained his ankle after being sacked by Northwestern's Corey Wootton in the second quarter of Iowa's 17-10 loss on Saturday. He left the game and was spotted on crutches and wearing a walking boot on the Hawkeyes sidelined.

I can only hope that all Iowa runs is bubble screens. It didn't seem like Vandenberg was able to throw down field much. Maybe Iowa can run McNutt back there a few plays to switch things up. I just hope that the Defense can somehow pull a win out of no where.

For all of the Stanzi doubters out there, it actually turned out that Stanzi was the Manzi. Iowa needed him to win, and win in the clutch. Hopefully Vandenberg can do half the Job Stanzi did.