The Buffalo Bills fired head coach Dick Jauron on Tuesday after a 3-6 start to the season. The Bills offense has been horrible and is one of the worst in the NFL. 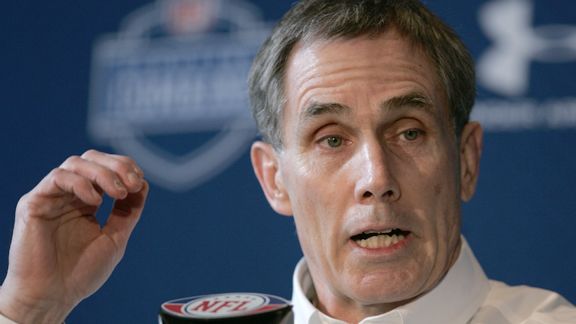 Jauron's record was 24-33 since being hired as head coach of the Bills. He had two years remaining on his contract, which means a free $6 million for the 2009 and 2010 seasons that he isn't coaching in. If only I could become a coach, do shitty, and get fired? and get paid?

Defensive coordinator Perry Fewell is expected to be named as the interim head coach.

So who will want to coach in Buffalo? No one. It is cold, and their team isn't very good. Although the team could move to LA in a few years if they keep up there crappy ways. So maybe it is a good job. Perhaps Turner Gill will leave Buffalo to coach for Buffalo. Although the Buffalo college team is probably a better job. Even though they both have the same winning Losing record. Man, Gill really should have taken that Nebraska job.

Maybe the same question should be asked, what free agent wants to play in Buffalo? Freezing city, brutal schedule. The only bonus is you get to visit Miami once a year. But I guess the fans are good there too. Oooo and Buffalo Wings.

Someone will eventually take the Buffalo job, and they will be their new savior. Buffalo fan's will welcome the change, and just hope that maybe this time, they will get a good coach.

Marty Schottenheimeranyone? Fred Jackson would thrive in his system.

I wonder what the real excuse for why Dick Jauron was fired?

2. Fred Jackson had a better passer rating than his QBs

5. Worst offense ever for all of the weapons they had

9. He was losing on purpose to get out of Buffalo.

10. He was looking ahead at the Brown's Job.

I guess we will never know the true answer?