Gary Kubiak announced today that Chris Brown will be the short yardage and goal line back for the Houston Texans this year. What does that mean for Steve Slatons fantasy value? It hurts it, obviously, I would move Slaton down from my 5th or 6th overall to 13h or 14th. He becomes a high tier #2 running back now rather than a stud #1 back. Chris Brown has shows flashes of brilliance in the past but he also spent all of 2008 on the sideline. If Brown gets hurt Slaton vaults back to his #1 back position. I think he's a steal if you can get him in the 2nd round. 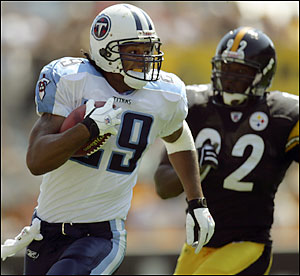