Plaxico Burress has pled guilty to weapons charge, agrees to 2 year prison term, for shooting himself. Had Burress pled not guilty and went to trial, he would have faced a minimum 3.5 years in prison if convicted.

The deal also reportedly calls for 2 years of post-release supervision. Sentencing has been scheduled for September 22nd.

I know Michael Bloomberg is trying to make a name for himself, but this sentence seems excessive to me, kill a person with your car? 24 days in jail. Shoot yourself? 2 years in jail. Someone please explain that to me. Plaxico also had a clean record before this incident. Vick had marijuana possession and had been a trouble maker since college. This is one of the fewoccasionswhere being an athlete actually hurt Burress and his case.

Hopefully other athletes will learn from Plaxico Burress, but unfortunately I don't think that will be the case. 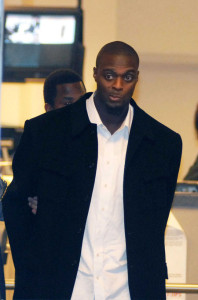